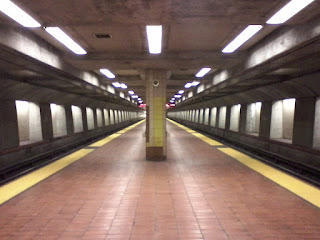 A few years back I had one of many eye-opening experiences on San Francisco's public transportation routes.

Rather than convey the story through dry, grammatically-correct prose, I chose a freewrite voice better suited to the lively, elastic vibe of those fifteen minutes. Here it is.

Directly in front of Head Bopper was Full Tilt, still yammering away about a friend whose parents were pushing her through school but she wasn't studying enough because she didn't really want to be in school and

A stop, a cat got on, sat next to Rap Boy, fist-bumped him

She rode just a few blocks and at one stop as the driver was about to close the back door and move along she suddenly yelled, "Wait! I have lots of stuff to carry. Wait!" And so

The driver waited she got off Head Bopper grinned at the drama, started bobbing his head again to the music

I got off at the next stop, said to Head Bopper, "Endless entertainment on MUNI"

keyboards and sax over a drum track

I gave 'em a dollar the saxman said thank you I said, "No. Thank you" and

I smiled back and gave him a thumb's up

Downstairs on the subway platform I ran into a soft-spoken bearded dude from my old meet-up group who wrote verse in a little black leatherbound book, if memory serves,

Are you still going to the group?

I broke away when the train came

The doors closed behind,

San Francisco on Truth and Beauty:

"It Starts with your Heart and Radiates Out" includes street art,
eye-catching architecture, and miscellaneous city scenes
in a stroll from the Mission to South of Market to downtown

"On a clear day you can see forever" explores Noe Valley, Ashbury Heights,
the Inner Sunset district, microclimates, and street art on a pristine September day

"A Sunny* Monday in San Francisco" is a day tour of the city,
from Mission Street to the Pacific Ocean

"A noirish door mural in the Mission District"


"The Golden Gate Bridge as seen from the Marin Headlands"