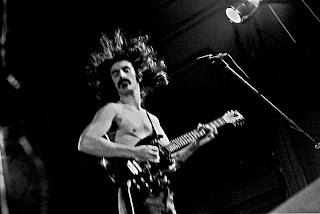 Unbeknownst to many conventional minds, Frank Zappa was a multi-faceted national treasure.

Zappa the social satirist skewered everything from Flower Power to televangelism to the valley girl patois.

Zappa the indie label founder produced highly original albums by Wildman Fischer and Captain Beefheart that otherwise never would have seen the light of day.

Zappa the activist spoke out against record labeling before Congress and jousted with a frothing fundy on a famous episode of "Crossfire."

Zappa the world citizen was appointed cultural emissary to Czechoslovakia in the middle of the Velvet Revolution.

And Zappa the lead guitarist was a force to be reckoned with.

Over the course of 25 years, Frank Zappa's hot leads graced a sprawling catalog which included the strictly instrumental "Shut Up 'N Play Yer Guitar" series and the fretboard-heavy "Guitar."

Unlike many rock guitarists, Zappa read music, and went beyond the Pentatonic to use a wide assortment of scales, modes, and voicings. Asked what he sought in a guitarist, Zappa said he didn't want "a Mongolian string-bender."

Where some solos (e.g. the solo for "Smells Like Teen Spirit") serve as extensions of the main melody, Zappa's solos were compositions in themselves--he once called them "air sculptures"--which took songs to new and interesting places.

First up in this embarrassment of riches is "Black Napkins." The best-known version is on the studio album "Zoot Allures." Below is one of many alternative renditions on YouTube. Notice Zappa's finger-tapping at the end. Within a couple years, Eddie Van Halen would refine and popularize the technique, thereby spawning countless faceless hair metal imitators.

The solo on "Inca Roads" which comes on at 2:01 was patched together from live jams and seamlessly woven into this long, suite-like studio piece.

"Montana," an L.A. boy's vision of life in flyover land, features a solo at 1:55 which feels shot out of a cannon, backed by a cooking rhythm section. A nice little touch is the lead poking its head in to double the chorus about fifteen seconds before the solo proper starts, hinting at what's to come.

The ever-resourceful Zappa took a live solo (from a 1978 performance of "The Torture Never Stops") and added sparse studio instrumentation to create "Rat Tomago," my earliest introduction to Frank's commanding lead voice. All we hear is a guitar, drums, and a softly droning bass line in the background, but the sound is larger than life - wave upon wave of grand, thematic guitar lines that end suddenly with the words Oh, listen to him go.

The best visual snapshot of Zappa's six-string prowess is this live version of "City of Tiny Lights." The song is not one of my favorites, but things shift into high gear when the solo comes on at 2:12. From the aerial image of Terry Bozzio's balls-out drumming to the opening shot of Zappa striding across the stage in platform boots (with a spotlight overhead and a long shadow trailing behind) to his communion with enthusiastic front-row fans, the ironic eyebrow arch at 3:10, and a fretboard's-eye view of Frank's blazing chops at 3:23, this is a feast. When it comes to electric guitar, it doesn't get much better than this.

more Zappa on "Truth and Beauty"