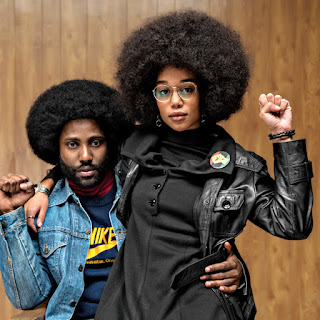 “BlacKkKlansman” couldn’t come at a more appropriate time. Barack Obama’s ascension to the presidency gave many Americans a smug satisfaction in their country’s racial enlightenment, a feeling that we had overcome, that the hopes and dreams of the ’60s civil rights movement had finally been realized. Donald Trump’s election paved the way for Spike Lee’s newest release by showing just how misplaced this sense of national pride was; it’s hard to imagine this movie having the same degree of resonance if Hillary Clinton had won.

Based on a true story, “BlacKkKlansman” follows Ron Stallworth (John David Washington), the African-American man who integrated the Colorado Springs police department in the early ’70s. After toiling away in the records department for a spell, Stallworth is elevated to the rank of detective. He meets love interest Patrice (Laura Harrier), the head of the local black student union, on his first assignment, going undercover at a speech by black power activist Kwame Ture.


Ture is targeted because Stallworth’s chief feels he is a potential security threat, but he is in and out of Colorado Springs in short order. A permanent presence, one with real potential for violence, is the local Ku Klux Klan. With some persistence, Stallworth convinces his boss to greenlight an investigation of the local Klan chapter.

In a series of darkly funny scenes, Stallworth dials up Klan members, including future Trump supporter David Duke, the Klan’s national director, and impersonates a racist white man who is eager to join the organization. Since Stallworth can’t attend the meetings without being discovered, white detective Flip Zimmerman (Adam Driver) infiltrates the Klan in person. Like Stallworth, Zimmerman has to fake loyalty to an ideology he despises and swallow his pride as the Klansmen he associates with routinely spit out anti-Semitic vitriol.

While Zimmerman investigates the Klan, suspense builds over whether or not he will be found out and on a personal level, Zimmerman faces tension between his professional role and his private self. Prodded by Patrice (no fan of law enforcement), Stallworth deals with a similar internal struggle.

The connections between Colorado Springs in the ’70s and Trump’s America are many. The image of Richard Nixon, the first modern president to exploit white majority racism, appears throughout the movie on campaign posters and signs. Discussing David Duke, one Klansmen tells another that by acting civil and wearing a three-piece suit, Duke is mainstreaming the white power movement, to which the other says, “hopefully one day we get someone in the White House who embodies it.” In case anyone doesn’t get the message, the phrases “America first” and “make America great again” are randomly shouted out in a crowded hall where Duke is speaking.

Everything leads up to a bravura segment that flips back and forth between a joyous Klan initiation emceed by David Duke and a somber set where activist and entertainer Harry Belafonte tells a group of young black political activists the gruesome story of Jesse Washington, a black man who was brutally tortured and murdered in Waco, TX in 1916. The scene shows not only how out of touch the white people at the Klan event are about race but how vastly the perspectives of the two groups of people differ. As Belafonte points out, racist whites aren’t the whole problem; referencing Washington’s murder, he says, “A lot of good white folks stood there like it was a 4th of July parade,” clearly implicating the millions of otherwise decent Americans who normalize or ignore Trump’s bigotry.

“BlacKkKlansman” shifts directions and moods multiple times in the last five-ten minutes, to great effect. There is a feel-good scene in the police office that would be the ending in 99% of Hollywood movies, but Spike Lee refuses to follow formula storyboards. Just as the audience begins to feel safe, a mysterious knock comes at Stallworth’s door in the middle of the night. The startling finale is a necessary shock to the system, a reflection of the primal forces Trump has unleashed and a sad reminder that 150 years after its end, the Civil War continues to rage in the dark hearts of all too many red state Americans.

Brown v. Board and Three Dog Night's "Black and White"
Actions, Not Words (a life review of Ollie Matson, an Olympic medal

"The Visual Odyssey of 'Loving Vincent'"