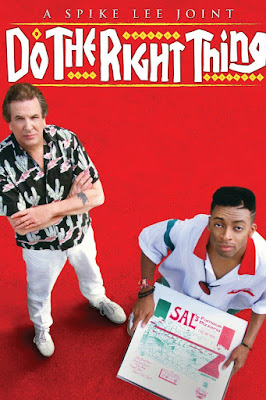 I re-watched Spike Lee's "Do the Right Thing" last Sunday, on the 30th anniversary of its release.

On some levels, the movie is a time capsule. It opens with Rosie Perez—dressed in a series of bodysuits, sporting a classic ’80s hairdo—dancing to Public Enemy as the credits roll.


At the same time, the film is still fresh and all too relevant.

The story takes place in Brooklyn’s Bedford-Stuyvesant neighborhood on a scorching summer day; as morning breaks, local DJ Mr. Señor Love Daddy (Samuel L. Jackson) announces that the temperature will get up to 100 degrees.

Lee, who grew up in Brooklyn, expertly captures the dense urban energy of blunt, fast-paced dialogue, steady foot traffic on the brownstone-fronted sidewalks, and the racial tension that runs through the ethnic polyglot of white, Korean, black, and Puerto Rican residents.

Mookie (Spike Lee) straddles the main fault line in the plot and the tricky feelings around race that drive the movie. He is a delivery man at Sal’s Pizzeria, the only black employee at an Italian-run business. The owner (Sal, played by Danny Aiello) and his youngest son are at peace with the local black community, but the older son Pino (John Torturro) is filled with rage and prejudice that Mookie can’t abate in one of the many pointed discussions of race in the movie.

Things heat up when Mookie’s friend Buggin’ Out (Giancarlo Esposito) throws a fit because Sal’s walls have photos of famous Italian-Americans but no African-Americans, though the clientele are overwhelmingly black. Seeking to form a boycott of Sal’s, he finds an ally in Radio Raheem, a towering figure who struts through the neighborhood cranking “Fight the Power” by Public Enemy on his 20-battery boombox.

While this plotline simmers, Lee gives us a series of vignettes of street life—kids running to the ice cream truck, people bathing in an open fire hydrant, three middle-aged locals sitting on the sidewalk light-heartedly ribbing each other while going nowhere in particular, a boombox face-off, and the wanderings of Da Mayor (Ossie Davis), a benign drunk with a ruffled dignity who tells Mookie, “Doctor, always do the right thing.”

The question is: with an issue as complicated as race, what is the right thing?

Mookie is torn between the pacifist message of love and universal brotherhood espoused by Martin Luther King, Jr. and the message of self-reliance and self-defense “by any means necessary” voiced by Malcolm X. Radio Raheem has four gold rings on his right hand that spell L-O-V-E and four on his left that spell H-A-T-E (see video below). Toward the end of the movie, when a shouting match at Sal’s ends in a fatal act of police brutality, Mookie has to choose between the two.

The explosive finale is both shocking and inevitable. As happened in Lee’s most recent movie, “BlacKkKlansman,” sudden violence disturbs the audience and forces them to think about a subject that most—white Americans in particular—would rather ignore. Donald Trump’s ascendance shows how little the United States has evolved over the past three decades, but the lack of progress isn’t limited to openly racist Republicans. Just as the edgy, urgent “Do the Right Thing” lost in the Oscar race to a safe, crowd-pleasing melodrama (“Rain Man”), the edgy, urgent “BlacKkKlansman” was bypassed by left-leaning (mostly white) Academy voters for a safe, crowd-pleasing melodrama (“Green Book”), showing that America’s dominant fallback on race continues to be full-blown denial.

Brown v. Board and Three Dog Night's "Black and White"
Actions, Not Words (a life review of Ollie Matson, an Olympic medal

"The Visual Odyssey of 'Loving Vincent'"