"A place in nature" freewrite 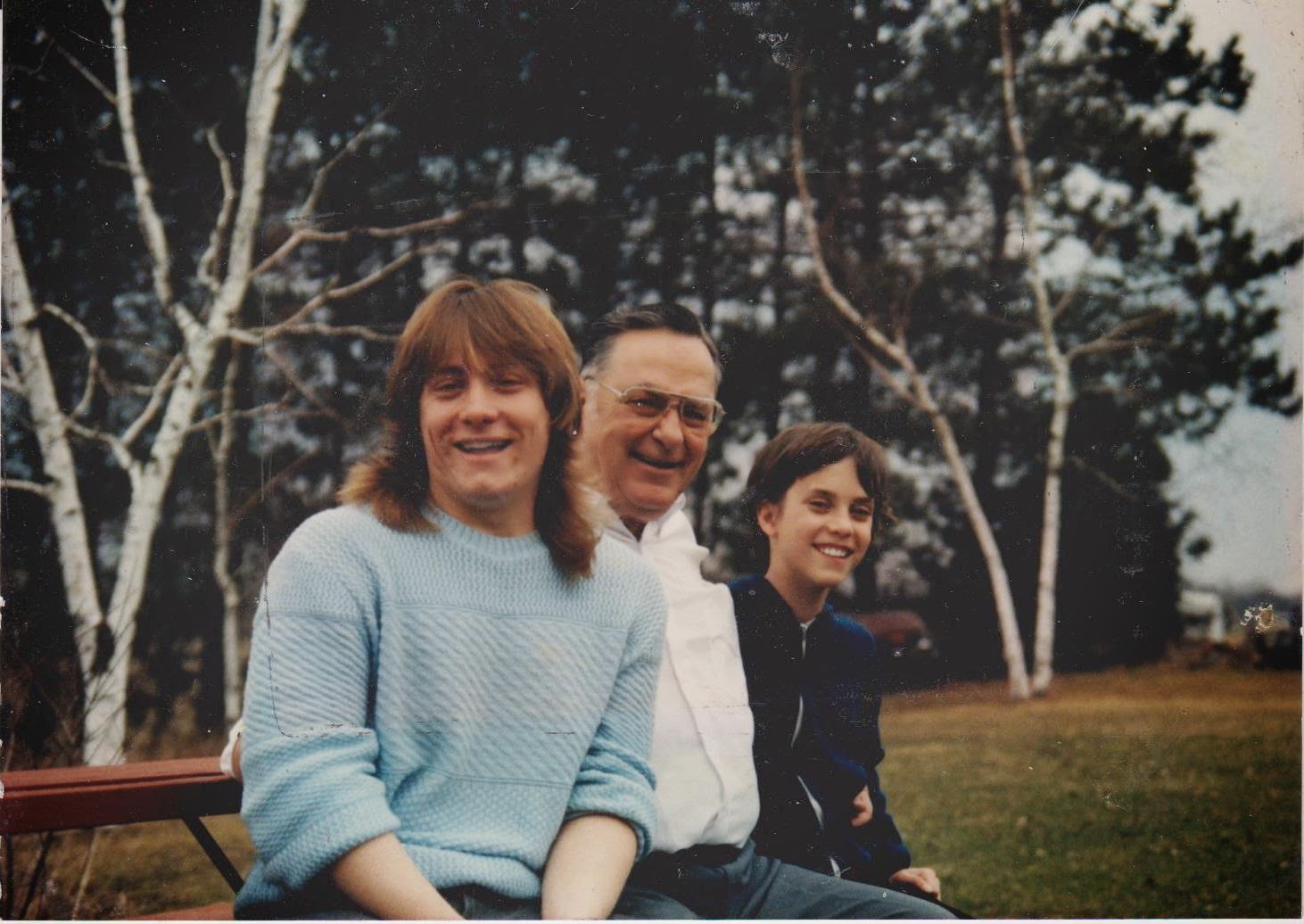 Today I had a rewarding mindfulness session with two good friends.

In no particular order, we jawed about jazz, Brian Eno, Jimi Hendrix, and the British invasion. We discussed relationships, the differences between men and women, the destructive role social norms play in the ways people perceive each other (and the ways we perceive ourselves). Also on the docket were the films of Darren Aronofsky/Biblical literalism, the JFK assassination, Barack Obama's place in the history books, and Victor Frankl's "Man's Search for Meaning," which segued into a riff on the struggle to avoid road rage and other negative reactions to our frequently challenging urban environment.

In between freewheeling discussions, we did Qigong and three 10-minute freewrite exercises in line form. The prompt for the first freewrite was "a place in nature." I chose the strip of forest pictured in the background of the above photo. When I was young, the forest on my grandparents' land was a getaway for me and my cousins.

Pine tree forest twenty feet across
Drops downhill, then up
Half a mile
Next to an open field
In the distance, a river line

All the way to
The big bootleg at the end
Sixty feet across
Trees spaced further apart,
Open

We sit on logs
Away from the grownups
Safe,
Still,
Peaceful.
Posted by Dan Benbow at 11:28 PM No comments: 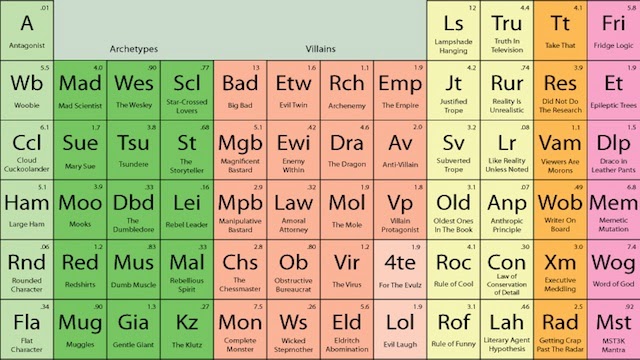 Earlier today I came across "'The Periodic Table of Storytelling' Reveals the Elements of Telling a Good Story" at openculture.com.

According to the article, the table's creator, James Harris, "has taken all the tropes, archetypes and clichés found in movies (not to mention TV, comic books, literature, video and even professional wrestling) and synthesized them into an elegantly realized chart."

This interactive version of the table allows the reader to peruse 176 tropes in detail. For example, the "Magic A is Magic A" trope has a lengthy main entry, a three-sentence analysis ("This trope is one of the primary advantages some media types have [over] others. Anime and manga, literature, and webcomics usually decide how the magic system works before they even start, and move on from there. Live action are usually much worse about this, and end up fumbling and falling into New Powers as the Plot Demands more."), a "laconic" analysis ("Made-up elements behave consistently"), a "playing with" tab which demonstrates different applications of the trope, quotes about the trope, and last but not least, a discussion board.

The same exhaustive treatment exists for 175 other tropes, including "Deus ex Machina," "Obstructive Bureaucrat," and "Star-Crossed Lovers." Whatever your favored format(s), The Periodic Table of Storytelling is both a great resource and a window into the rich variety of narratives available to 21st Century storytellers.
Posted by Dan Benbow at 11:42 PM No comments:

Email ThisBlogThis!Share to TwitterShare to FacebookShare to Pinterest
Labels: Writing 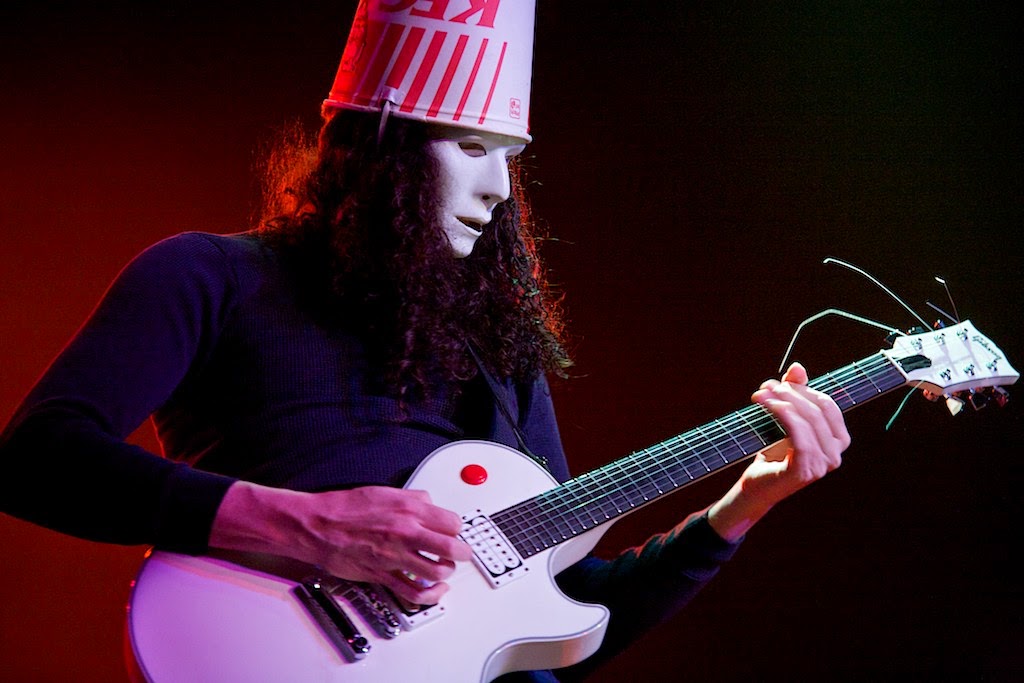 Though perhaps best known to the general public for his mask and unique headgear, Bucket is an exceptionally versatile musician with sizzling guitar chops.

In two decades on the music scene, he has collaborated with Mike Patton (Faith No More), Iggy Pop, and Bootsy Collins, and ably manned the lead guitar post in a Guns 'n' Roses re-boot. He has created a sprawling catalog of experimental solo releases which incorporate multiple genres, from metal to funk to hip-hop to electronica to moody instrumental ballads to jam rock and even hints of new age music. And when the moment is right, Bucket can transform himself into a robotic dancer.

The video below from Bonnaroo features Buckethead in big company:  the fearsome Primus rhythm section (Les Claypool on bass, Brain on drums) and Bernie Worrell, the emeritus keyboardist from Parliament-Funkadelic. Buckethead is capable of dizzyingly fast shred guitar, but here he lays down a molten, blues-based jam over a deep pocket, an example of the heady blend of technique and feeling Buckethead can draw on. In whatever context(s) he chooses to pursue, Buckethead will continue to generate original music and wicked fretboard work for many years to come.

here for "It was 70 years ago today:  an appreciation of Jimi Hendrix" 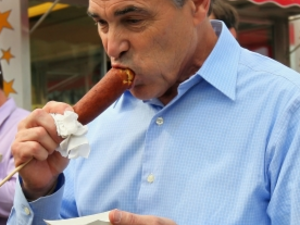 "Even as science, technology, and the human race evolve, vocal sectors of the GOP remain stuck in reverse—and proud of it. To capture this bizarre phenomena in real time, I am christening a semi-regular new series—'21st Century Republicans'—where I will share surreal GOP episodes of bigotry, misogyny, or hostility to science and reason."

Since Part III of "21st Century Republicans" came out three weeks ago, the crazy has continued apace. While the civilized world embraces the strides made by our gay, lesbian, and transgender brothers and sisters these past few momentous years, GOP reactionaries (including Governor Rick Perry, pictured above) maintain an unhealthy fixation on the things other people do with their genitals.


"Pat Robertson: Jesus more likely to stone gays to death than bake them a wedding cake"

"Oregon GOP candidate for governor: Same-sex marriage is 'a sin, just the same as murder'"

"Watch: 'Obama May Well Be A Homosexual' Says GOP Candidate For Governor"

"Wisconsin Republican Legislator Tears Into His Own Party For Voter Suppression"

"As his own party pushed through the Wisconsin Senate the latest in a series of measures to make it harder to vote in the state, Sen. Dale Schultz (R) blasted the efforts as 'trying to suppress the vote' last week."

"....It’s just, I think, sad when a political party — my political party — has so lost faith in its ideas that it’s pouring all of its energy into election mechanics...it ought to be abundantly clear to everybody in this state that there is no massive voter fraud. The only thing that we do have in this state is we have long lines of people who want to vote. And it seems to me that we should be doing everything we can to make it easier, to help these people get their votes counted. And that we should be pitching as political parties our ideas for improving things in the future, rather than mucking around in the mechanics and making it more confrontational at the voting sites and trying to suppress the vote."

While Dale Schultz was being a responsible legislator, his Republican colleague Scott Fitzgerald was engaged in crass cronyism:

"In a Sunday editorial, the Milwaukee Journal Sentinel noted that the connection between Fitzgerald and his brother’s insurance lobbying 'looks suspicious and smacks of special interest politics.'

"'This is a matter of fairness for people facing grave illness,' the editorial added. 'Whatever his motivations, Fitzgerald is singlehandedly blocking a bill that most of his colleagues support and that could help people — probably some of his own constituents. He should allow the bill to come to the floor.'"


Idaho Republicans endangered air and water quality in a fit of ideological pique:

Despite rhetorical efforts from Republican GOP puppetmasters to pretend otherwise, the GOP's hostility to women continued to leak out.

"[Republican Senator Mitch] McConnell fundraiser: Wives owe their husbands sex even if they're not in the mood"

"A [Republican] male federal judge in Nebraska is getting attention for writing a blog post Tuesday about 'how young women lawyers dress.'

"'I have three rules that young women lawyers should follow when considering how to dress for court,' U.S. District Court Richard Kopf wrote on his personal blog. '1. You can’t win. Men are both pigs and prudes. Get over it. 2. It is not about you. That goes double when you are appearing in front of a jury. 3. Think about the female law clerks. If they are likely to label you, like Jane Curtin, an ignorant slut behind your back, tone it down.'"

"....'Well, we all like to be paid more and that's great, but the reality is that women have a different lifestyle,' Land said at the 2010 Senior Women's Club event. 'They have kids. They have to take them to get dentist appointments, doctors appointments, all those kinds of things. And they're more interested in flexibility in a job than pay.'"

"Adviser to Texas GOP’s Greg Abbott: No 'evidence' that women are 'significant thinkers'"
To be continued.
p.s. email GOP episodes of bigotry, misogyny, or hostility to science and reason to benbowdan@gmail.com

Other political writing by Dan Benbow:

"Basking in the Afterglow: Scenes from the 2012 Campaign"

"Off the Books: The Outsourcing of American Foreign Policy, Part I -- A Roll of the Dice" features an interview with powerhouse historian Peter Dale Scott, in reference to his book "The Road to 9/11: Wealth, Empire, and the Future of America"

"Off the Books: The Outsourcing of American Foreign Policy, Part II -- Operation Blowback"
Posted by Dan Benbow at 8:57 PM No comments: 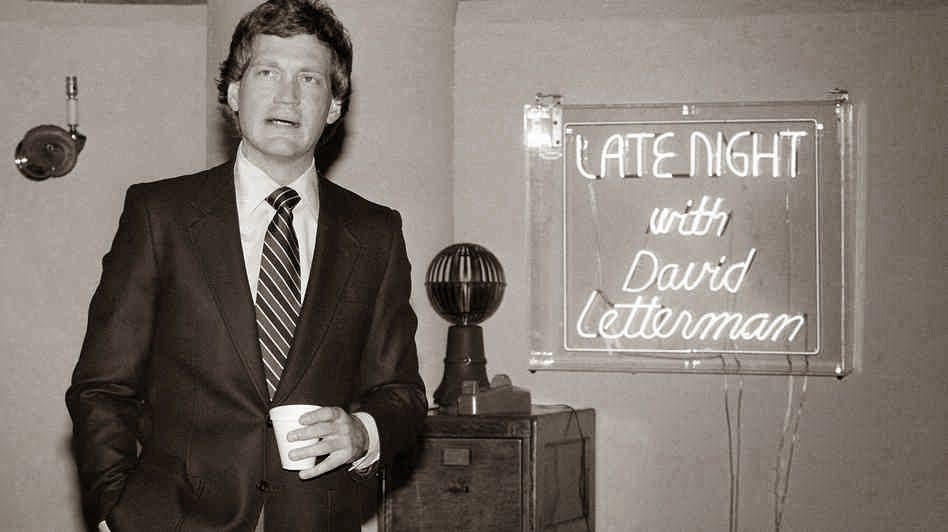 Many years ago I happened on "The Late Shift: Letterman, Leno, & the Network Battle for the Night," a book about the behind-the-scenes maneuvering for Johnny Carson's coveted Tonight Show seat.

The major takeaway was that Jay Leno's chirpy, non-threatening personality and bland, by-the-book interviewing style won him the favor of advertisers, who appear to have made the decision for NBC's executive eunuchs.

Fortunately for us, Letterman dusted himself off, moved his quirky, no-bullshit approach from NBC to CBS, and ultimately outlasted Leno. Last night Letterman announced his retirement.

Letterman won't be off the air until 2015, but now is as good a time as any to take a quick look at some highlights of America's ballsiest, most offbeat late night host.

"Late Night with David Letterman" began in 1982. That same year, professional provocateur Andy Kaufman—one of Letterman's regular guests—faced off against Jerry Lawler, who (Kaufman claimed) had injured him in a televised wrestling match a few months earlier.

Crispin Glover may've been the most bizarre Letterman guest ever in this 1987 appearance.

Letterman has distinguished himself from other talk show hosts by testing many of his guests rather than merely going through the predictable rituals of mutual admiration. Some of his interviewees have pushed back, including Madonna, who gave as good as she got in this free-flowing 1994 interview.


In 2009, unbeknownst to viewers—and Letterman himself—Joaquin Phoenix affected the role of a borderline catatonic as part of an ongoing series of media stunts which he chronicled in the documentary "I'm Still Here." Rather than hold Phoenix's hand through the interview to minimize the discomfort of the moment, Dave responded with the acerbic gusto that has always set him apart from his peers. (Phoenix later explained in a return interview that he had come on the show hoping for "a beat down," and was happy that Dave had obliged.)

In 2014, Letterman's show lacks the edge it once had, but he has had a helluva run—the longest career in late night history. Few television entertainers can lay claim to three decades of keeping it real.
Posted by Dan Benbow at 4:32 PM No comments: 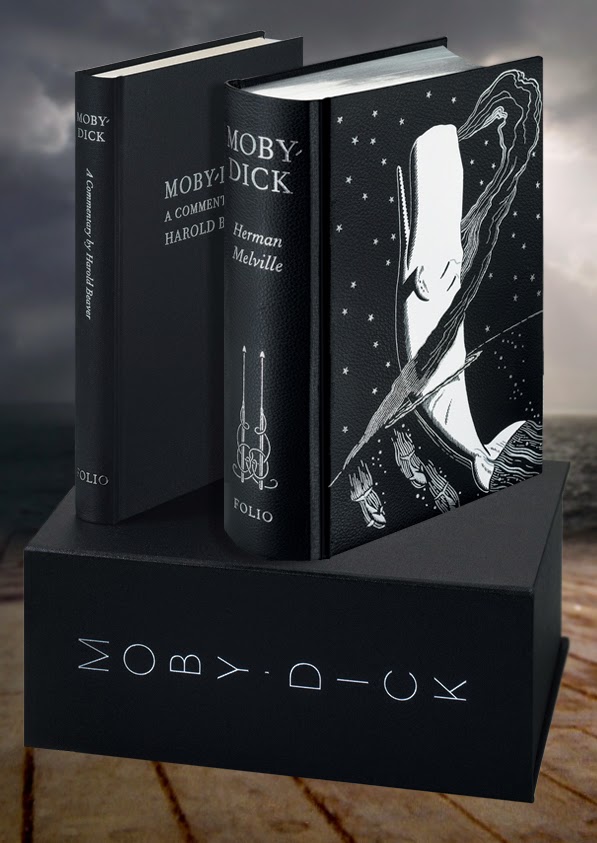 But I'm not religious about it. I'm resistant to hard-and-fast rules about creative processes and much more focused on creating interesting subject matter, a clear, readable narrative flow, and a last sentence that pulls the threads tight or leaves the reader with a lasting impression.

The other day I saw "Lists of the Best Sentences — Opening, Closing, and Otherwise — in English-Language Novels" at openculture.com, and found myself pulled in.

Included in the piece were links to The American Scholar's ten best sentences, 22 authors' favorite first lines, as well as the 100 best first—and last—lines in fiction, according to the American Book Review.
Though I haven't read these books in years, the opening sentences in Anna Karenina, Lolita, Ulysses, Waiting for the Barbarians, and Moby Dick had a familiar sparkle and impressed me all over again with their staying power (particularly "Call me Ishmael" from Moby Dick, a three-word sentence which has lasted over 160 years).

I can't say I was converted to the cult of the opening line, but reviewing these beautiful and timeless sentences was pleasurable, and it did give me something to think about.
Posted by Dan Benbow at 9:59 PM No comments: