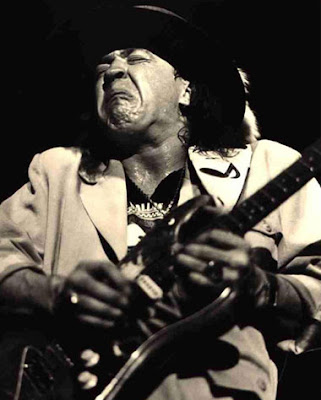 "The way I look at it is that if the next show we do is the last one I ever get to do, it sure would be a shame if I didn't really try and give it all my best"


Back in the summer of 1990, I met a fellow rabid music fan named Mickey at a night-time cleaning gig. The handful of office workers who were still around when I started at 6 generally didn't interact much with the cleaning crew, but he saw my "Master of Puppets" t-shirt and struck up a conversation. (*click here for the soundtrack to this post)

Mickey said that Metallica was cool, they had their thing, but suggested I listen instead to the Grateful Dead, whom he considered a much more evolved band. Specifically, he told me I needed to see the Dead in concert, as he had too many times to count.

I knew more about rock than most of my peers, but within a minute or two it became obvious that Mickey's knowledge was far greater, encyclopedic even. Though just a couple years older than I was, he had seen infinitely more shows than anyone I knew.

Not to be totally outdone, I mentioned that I was going to see Robert Cray, Eric Clapton, and Stevie Ray Vaughan in a couple months. Stevie was on the road in support of his new album, "In Step," a reference to his being clean and sober after years of drug and alcohol abuse.

Mickey looked at me for a moment, thinking this over, and said, "Stevie Ray Vaughan is a bad-ass motherfucker. Eric Clapton better be ready for that show or he'll get blown off the stage." 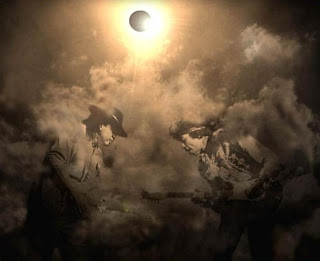 This comment mirrored what I'd heard about Stevie's concerts; every review was glowing. Two different friends said they'd been blown away by the Stevie Ray-Jeff Beck "The Fire Meets the Fury" shows. A member of my inner circle (a tough customer not given to the kind of lavish praise found in this post) came back from an SRV show in punch-drunk, satisfied silence. The estimable Don Johnson spoke of watching as Stevie "attacked" his guitar.

As I saw it, when it came to rock and blues guitar, Stevie was the Second Coming (with Jimi being the first). There were plenty of phenomenal second generation electric guitarists--Eddie Van Halen, Adrian Belew, Trey Anastasio--but no one brought the raw blues power and mystical intensity of Hendrix up through the '80s like Stevie Ray Vaughan.

And who else had the cojones not only to play "Voodoo Child" night after night onstage, but to make it his own? (To say nothing of Stevie's unparalleled cover of "Little Wing.")

Unfortunately, as the concert approached, I was an unemployed and broke college student 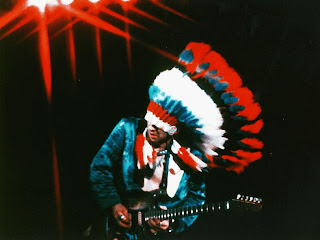 given to eating pasta with butter and salt and taking advantage of quarter taps night at the local bar. $30 was a major expense. I explained this to my friend, who had purchased the tickets, and said I could see Stevie another time; he was always on tour. But she insisted I go, so I went.

At the show, we tailgated during the bulk of Robert Cray's opening set. Most of the people in the audience were sitting down as attendees filtered in or lined up at concession stands.

We caught the last few numbers of Cray's act. It was professional and authentic, but low-key. There wasn't much of a wow factor.

Stevie Ray Vaughan was another matter. The venue of 37,000 was much more crowded 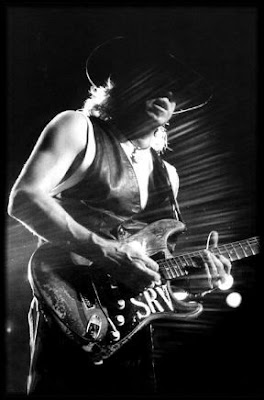 when he came on, and from the opening number Stevie's band had the audience on their feet and fully engaged in high energy, no frills rock 'n' blues.

Every one of Stevie's solos was fluid, eye-popping, point blank. His guitar tone was big and bold, commanding. During the rapid-fire funk guitar riff that opens "Couldn't Stand the Weather" (here played at :57) my buddy turned to me and said, "Stevie's baaaaad."

The crowning jewel of the set was the closing rendition of "Voodoo Child (Slight Return)." Jimi Hendrix's original studio version clocked in at 5:14, but Stevie added a few extra minutes of improvisation at the end. Midway through the song, as he soloed, I thought what could he possibly do to top this? A minute later he'd taken the jam to an even higher level, and up, up, up he went until finally he was rearing back on his boots sculpting colossal washes of feedback like a big-wave surfer.

Without exaggeration, it was a performance for the ages. Clapton's headlining set afterward felt anti-climactic. The audience was seated, other than during a handful of classics like "Layla" and "White Room." This wasn't the smokin' fresh Clapton of Mayall's Bluesbreakers or Cream, but a safe Slowhand fronting a band with a middle-of-the road pop energy. Clearly there was a new sheriff in town.

I stayed at a friend's house after the drive home. Still decompressing from the concert, we 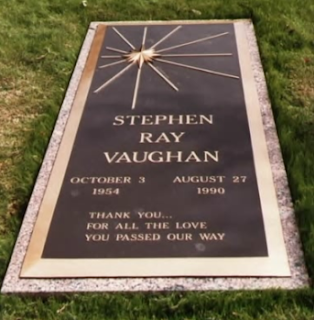 hung around conversing with the radio on. In the wee hours a news broadcast reported that there had been a helicopter crash after the show. It was rumored that Eric Clapton may have been on the helicopter, but there was no confirmation.

We stayed up, keyed to the radio. After a few rounds of 'there is no confirmation yet whether Eric Clapton was on the helicopter,' a surprising announcement came across the airwaves.

The dead had been identified.

Among them was Stevie Ray Vaughan. 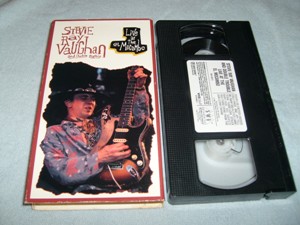 At the time, I was a young, hungry guitarist who practiced daily and often thought about guitar when I wasn't playing, while walking or sitting in class or watching a movie that didn't pull me in. Stevie's volcanic finale and sudden death drove me to buy all of his music and go on a listening binge. For several months my roommates had their fill (and then some).

The narrative arc really took off one night the following summer, at a small house party. Rob, my co-worker, told me about a videotape he had of Stevie Ray Vaughan titled "Live at El Mocambo" (above). Naturally, I asked to borrow it.

This five-dollar VHS tape became an object of obsession, my personal version of Beatlemania. Among the treasures were the canon blast opening of "Testify," a perfect title for a fiery instrumental in which the guitarist stands and delivers from the bottom of his soul. There was the gentle beauty of "Lenny," a subtle jazz-inflected song Stevie wrote for his wife, complete with beads of sweat and a trailing cigarette. Not to mention a routinely
mind-blowing "Voodoo Child (Slight Return)." 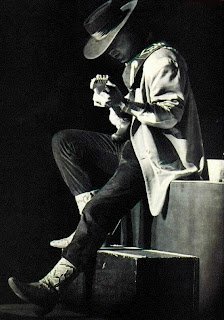 Flood" For the first month I had the tape, I watched this tour de force almost every day. Not only was the playing spellbinding to my inner music fan, but "Flood" gave me a clinic in electric blues guitar. Soon I was aping Stevie's meaty bends and wide vibrato, on high-gauge strings.

Hundreds of practice hours passed before my first and only "Mocambo" conversion--my roommate Bob, who was smitten on first viewing. A born salesman (I used to endearingly call him "Lloyd," after Lloyd Bentsen, one of the Clinton Administrator's slickest operators at the time), Bob eagerly introduced "Texas Flood" to our many guests--post bar-time revelers in particular--for the rest of the summer. Blues wasn't everybody's thing, but Bob's infectious fervor bought patience - if not shared enthusiasm. 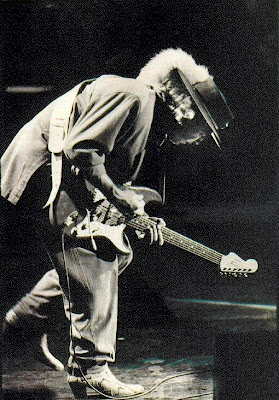 Fifteen years and a lot of life later I visited Bob and his fiancée in Chicago. We caught a set at the classic Green Mill Jazz Club then returned en posse to Bob's pad, where we watched live music videos on his brand new big screen TV, which was connected to a state-of-the art stereo.

At some point very late in the evening, the words "El Mocambo" were uttered. Bob pricked up with excitement and walked over to his entertainment center, but couldn't find the DVD. He kept looking as buzzkill set in, wondering aloud what could have happened to THE EL MOCAMBO DISC.

After Bob had all but given up, his fiancée looked over and said, "I hid it."

What performance could drive people to such lengths? Or fetch seven million views on YouTube (before the greedy record company had it removed) with a blues cover that had received virtually no radio airplay?


Among the embarrassment of riches in the video above is Stevie's sheepish little smile 15 seconds in, as if he knows he's about to slay that audience,

his ballsy decision to bring a little distortion at 1:11, before the first verse,

the ecstatic look on his face as he bends forward and arches his eyes skyward at 1:53,

the monster, barge-like bends that begin around 4:45, not to mention

his in-your-face gesture to the camera at 7:21, and

you get the picture.

Anyone who appreciates music, the blues, the electric guitar as an instrument--or witnessing a consummate artist at the peak of his powers--ought to watch this video.

Here, ladies and gentleman, was one musician who wasn't doing it for the money. 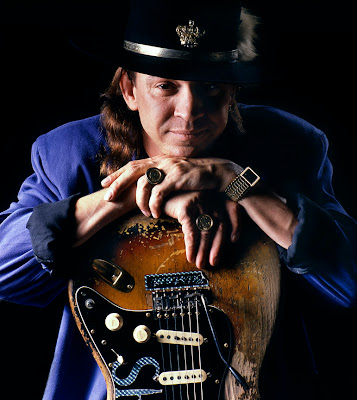 Click here for "It was 70 years ago today:  an appreciation of Jimi Hendrix"